Get Rid of Your Stinkin’ Thinkin’

Life is an adventure only if you decide to make it one!

Hello! I just got back from what ordinarily would have been just another business trip for Verizon Telecom. What I experienced instead was as an adventure filled with discovery and fascination for a time period long since gone. This journey left me with a gift of appreciation for those brilliant spirits who have come before leaving me with a heart filled with inspiration (from enthusiasm the Greek entheos “en, in; + theos, god;” or “to be inspired…”) and love.

Earlier this month I was in Boston, working at 185 Franklin Street, the Verizon building that once was part of the original Bell Telephone system. In fact in the marble face of the building above the main entry there is a brass Bell logo that says American Telephone & Telegraph, DBA New England Telephone. It is in fact very beautiful piece of Bostonian architecture nestled in the financial district of downtown Boston. I was reminded of the significance of the Vail name the role it’s played in telecommunications history by viewing the many plaques that adorn the walls honoring Theodore N. Vail, the first president and CEO of the original AT&T known then as American Telephone and Telegraph. Vail was chiefly responsible for selling congress on the idea of a monopoly much like the postal service had for the U.S. Mail. Congress agreed and the monopoly of “Ma Bell” was created. Vail’s dedication to basic science inspired the creation of Bell Labs, the research arm for AT&T. He was hired to serve directly by Alexander Graham Bell.

After my visit to Boston I was inspired to do more reading on Theodore N. Vail, when my geneology research took me further back in time to the early 19th century and the historic Vails of Speedwell Iron Works; more great Vails who set in motion core elements necessary to fuel the industrial revolution. As my study progressed I learned of the enormous technological contributions that Alfred Vail made to the Telegraph, the precursor to the Telephone. As history literally unfolded before my eyes I soon realized that the people and events I was reading about all took place in Morristown, a neighboring town to Madison New Jersey where I would be working on my next business trip for Verizon Telecom. Now how’s that for being in alignment with inspiration! 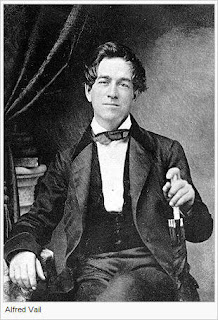 While in Morristown, I visited the St. Peters Episcopal Church cemetery where Alfred Vail and his father Stephen Vail of Speedwell Iron Works are buried. I had the necessary supplies to take charcoal impressions from Alfred’s headstone. As I rubbed the charcoal pencil over the raised letters their images were transferred to paper. Slowly the characters spelling out V A I L appeared. I was moved beyond words at this moment as my consciousness realized the connectedness to the brilliance of a man who contributed so much to what we know as telecommunications.

Directly across the street from the church is the Vail Mansion. The caretaker of the church informed me that this was the estate which Theodore N. Vail had constructed to retire in. He died before he would ever live there. He is buried in Parsipanny, New Jersey in what is known as the Vail Memorial Cemetery, just a few miles from Morristown, so of course I made the trip over to Vail Memorial Cemetery located on, you guessed it… Vail Road. In 1922, The Vail Mansion began service to the City of Morristown and served as their municipal building for 70 years. It has now been sold to a private developer and is being constructed into exclusive condominium and town homes.

The next day, I traveled just a bit further down 202 in Morristown which is actually Speedwell Drive and tour of the famous Speedwell Iron Works. At the visitors center I was greeted by friendly staff. When they found out I was a Vail, I received the red carpet treatment. I was given a personalized tour of the grounds and historic buildings by a bright young man and intern by the name of Josh Rockland. Josh and I hit it off and as we walked, he exclaimed “This is so cool to be escorting my first Vail here at Speedwell.” He was obviously as excited as I was to be there. A present day Vail visiting such a historically rich site of past Vails… truly an amazing experience.

Josh and I spent the next two hours going back in time to the early 1800s, a time when the Vail entrepreneurial spirit was alive and thriving, contributing immensely to what would later be known as the Industrial Revolution. It was at Speedwell Iron Works that the Telegraph was born. Alfred Vail and Samuel Morse first demonstrated the device with two miles of copper wire coiled around the room on nails. Stephen Vail, Alfred’s father was given the honor of sending the first ever message to be transmitted over copper wire “A patient waiter is no loser.”

That brilliant message still holds true to this day and is so perfectly aligned with this quote from Wayne Dyer, “Infinite patience brings immediate results.” How nicely this ties together my personal experience of this past week with my message to you which is the “essence of allowing”. You see none of what I experienced this week would have been possible had I not allowed myself the experience. Often times when we feel a drive to pursue a goal or a desire we are quick to rationalize it away by over analyzing. We essentially think it to death. Once you believe that you can do, be, and have anything you desire, then and only then will your desires manifest for you and only to the extent that you are clear. I was so clear on my intentions of a Vail pilgrimage that what showed up not only matched perfectly to my intentions, but totally blew me away. It was truly a life changing event and I am looking forward to the opportunity to return to Morristown, New Jersey with my wife and children so they can share in the heritage and history of The Vails of Speedwell Iron Works. 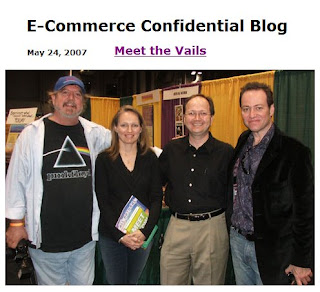 Returning home with an education on the Vail entrepreneurial spirit from the days of the first Telegraph at Speedwell and a renewed sense of self, I was reminded of the entrepreneurial course that Donna and I have charted; writing, publishing, coaching and speaking by harnessing the power of the Internet. If only Alfred and Theodore could see what their inventions and leadership created… the Internet, satellite communications, wireless phones and on and on the list can go. They would be astonished. One of our Internet marketing mentors, Bill Hibbler last month showcased us on his blog titled “Meet The Vails” where he said “Their first info product… is, in my humble opinion, going to be a home run. The sales letter is brilliant and so is the product.”

So get rid of the “stinkin thinkin” as the title of this blog entry wales. Get out of your own way. Remove the blocks to whatever holds you back. Welcome each new day with the excitement of a new birth. After all… the morning is the birth of a new day, so get out there and rock and roll the bones. Get busy!

Sending you love and all green lights,

This entry was posted in Uncategorized. Bookmark the permalink.

5 Responses to Get Rid of Your Stinkin’ Thinkin’